Maeve Masterson is a junior in the School of Arts & Sciences majoring in Environmental Studies with a concentration in environmental management and sustainability. She is minoring in Economic Policy and is a second year Undergraduate Fellow at the Wharton Risk Center.  Maeve is interested in how to mitigate the effects of climate change, and the injustices faced by marginalized, vulnerable communities through better climate risk management across the private and public sectors.

With the increasing frequency and intensity of climate-change induced natural disasters, urban food systems are at growing risk, further threatening the food security of vulnerable residents. Due to critical food access and distribution vulnerabilities—many highlighted in the wake of natural disasters such as Hurricane Harvey and Superstorm Sandy—there is a rising imperative to identify food system risks and integrate them into urban emergency management plans. This blog post examines supply chain vulnerabilities and food assistance failures post-disaster, and makes three recommendations for public and private urban food organizations to address these risks for stronger, more equitable food system resilience.

Food system disruptions in the aftermath of hurricane landings in U.S. cities are commonly depicted as vacant grocery aisles and long waiting lines winding across flooded supermarket parking lots. Five days after Harvey began, Houston supermarket chains such as Kroger, Walmart, and H-E-B Tuesday struggled with dwindling supplies as they waited for distribution centers to send trucks out to restock stores. Warehouse trucks fortunate enough to travel across submerged roads and bridges were met with flooded supermarket loading docks. Even a successful delivery of supplies proved futile, with most employees stranded at home and supermarkets unable to operate under high demand. A historic grocery store serving New Orleans’ 7th ward is another familiar example of the long-lasting effects of flood-induced food system disruption. After Hurricane Katrina in 2005, the Food Circle Store remained closed for nearly eight years. Bank loans, city grants, and tax credits funded an $8 million renovation in 2014, keeping the store afloat for three years until drainage system failures made way for another flood to destroy most food storage equipment in 2017. Many other post-disaster stories of hunger derive from similar, avoidable shocks to urban food networks. Clearly, there is work to be done. 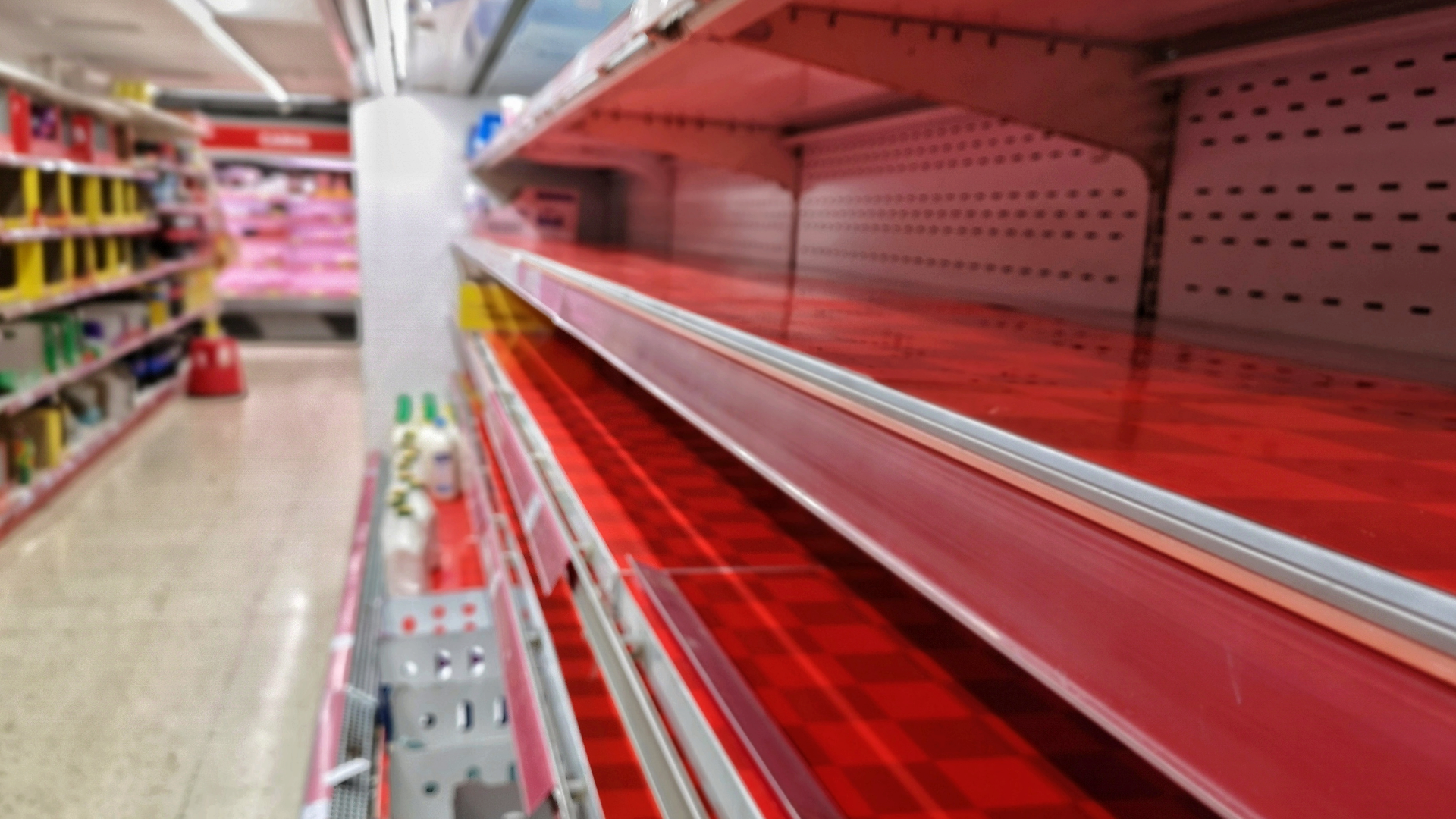 Storm and flood events create supply disruptions when processing and distribution centers are located or concentrated in high-hazard areas. For example, in New Orleans, over a third of warehouse suppliers in the city are located in “at risk” areas. In New York City (NYC), the 329-acre Hunts Point Food Distribution Center (pictured below), responsible for annually transporting 4.5 billion pounds of food in and out of Hunts Point, is a potent example of place-based risk. The Center’s low-lying location on a peninsula presents a serious threat to the NYC’s food supply, with sixty percent of the city’s produce distributed within the city moving through Hunts Point. Damage to food-exporting distribution facilities can also reduce supply to other cities, evidenced by the fifty-two-million-pound product loss of New Orleans Cold Storage (NOCS) warehouses after Katrina, cutting off supply from one of the largest suppliers of beef, poultry and pork exports in the nation. 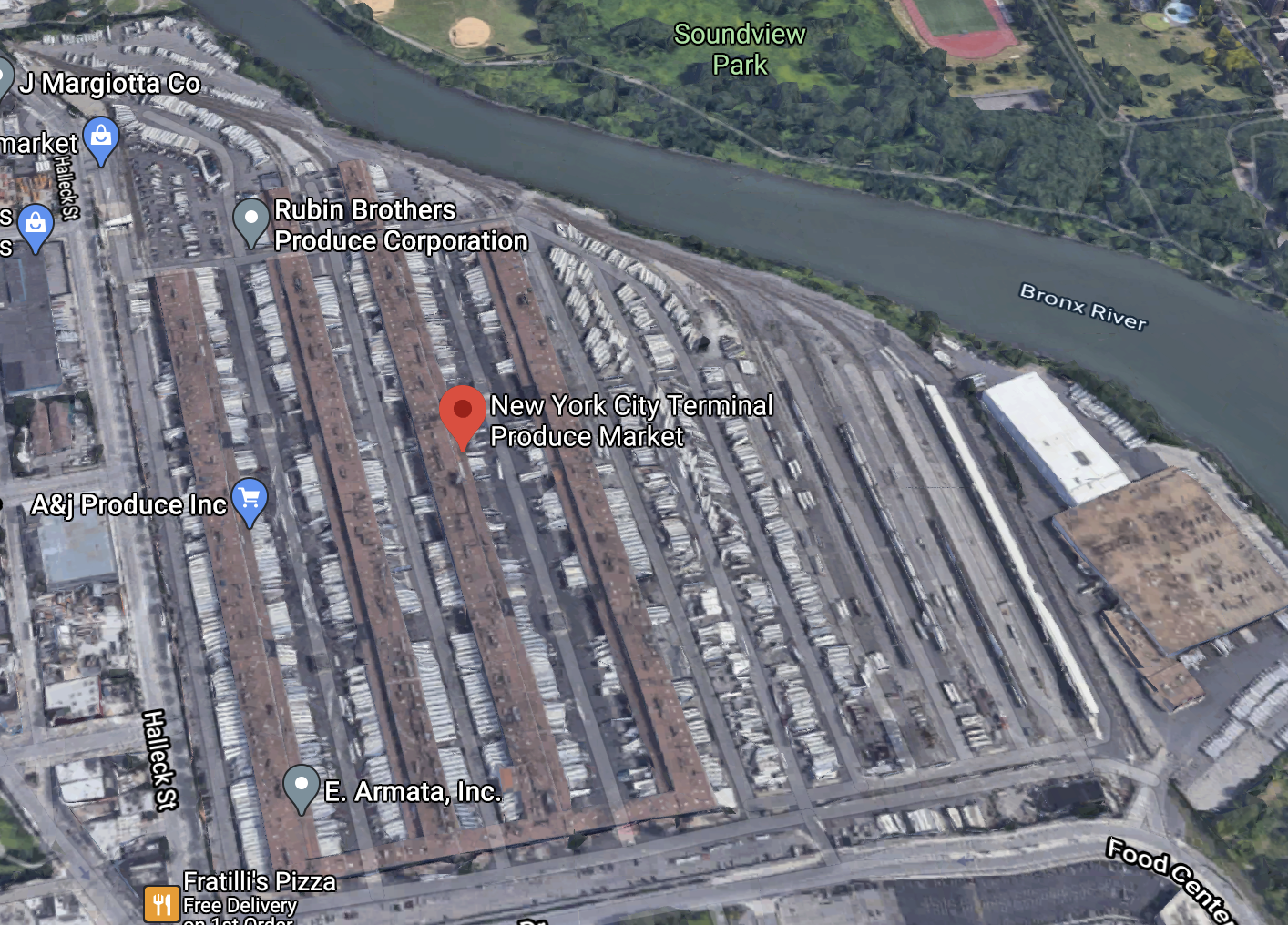 Hurricanes and tropical storms cause widespread power outages that can last days or weeks. In many areas of New Jersey, it took five weeks to restore power after Hurricane Sandy. In Baltimore, 200,000 people were left without power the day Sandy made landfall. Extended power outages can result in major food safety hazards, including unsafe food preparation, water contamination, and foodborne disease outbreaks from improper food storage. NYC recognizes the risk of future storms to the Hunts Point Distribution Center, and has recently proposed installing a micro-grid in case of a blackout.

Transportation routes are bloodlines for food supply and food access. Major roadways can be vulnerable to extended closure or impairment after a storm, blocking distributor transport routes and delaying produce delivery. Because supermarkets are typically stocked to last only four or five days, reserves run out quickly during distributional delays, posing serious threats to food-insecure individuals. For example, following Superstorm Sandy, trucks dispatched from Baltimore’s wholesale suppliers were left stranded on an interstate from flood-related traffic and road closures. Surrounded by water, New Orleans and NYC’s bridges and tunnels are highly prone to flooding and restrict access to distribution trucks. In NYC, half of the city’s food travels through only four major bridges and two tunnels.

Food retail, including grocery and corner stores, are at risk of delayed reopening due to inadequate government assistance or insufficient private flood or business interruption insurance. In New Orleans, forty-two percent of grocery stores, fifty-three percent of supermarkets, and fifty-three percent of corner stores are located in areas that were flooded after Katrina. By 2007, two years after the storm, half the city’s supermarkets remained closed and food access points (including supermarkets, grocery stores, and corner stores) decreased by sixty-two percent. Many businesses in New Orleans were denied private insurance claims and offered lower than expected settlements. In some instances, payouts were delayed for years. Fifty-five percent of businesses were denied low-interest disaster loans from the U.S. Small Business Administration (SBA) after Katrina. Of those that were approved, sixty percent never reached applicants.

These vulnerabilities in the food supply chain combine with other social vulnerabilities to stress food insecure populations post-disaster, including low-income individuals, food desert residents, the elderly and disabled, those with medically-restricted diets, and those experiencing homelessness. There is a stark correlation between physical and economic food access barriers for food-insecure populations, creating heightened food access vulnerabilities in these areas. For example, of the sixteen neighborhoods with low food retail in Los Angeles, fourteen have higher SNAP rates than the city average. Research also shows that wealthier neighborhoods have twice as many supermarkets as low-income neighborhoods, and that white neighborhoods contain an average of four times as many supermarkets as predominantly black ones do, with less selection in grocery stores in African-American communities.

Food assistance in the aftermath of disasters fails to support food insecure populations, as food banks are forced to turn away customers due to food and monetary donor fatigue, prolonged increases in demand, and labor shortages. With more households becoming food insecure due to disaster-related expenses and loss of income, food assistance organizations serve a higher number of residents for longer than usual periods. In addition to food assistance deficits, public transit and road closures present significant food security threats to residents living in food deserts, and the 2.3 million people (or 2.2 percent of all US households) that live more than one mile away from a supermarket and do not own a car. School system closures or delays are yet another dangerous prospect for food-insecure school children that rely on free daily meals. In Baltimore County, over 31,000 children struggle with food insecurity and ninety-seven schools have a poverty level greater than fifty percent.

Cities’ resilience and disaster recovery plans should directly address disruptions to all aspects of the food system, from recognizing the concentration of food distribution networks and food access points in at-risk areas, to identifying risks from power outages and transit impairment. These plans would ensure that damaged household, business, and transportation infrastructure is repaired in a way that mitigates risks to future disaster-induced food system disruption.

Currently, food organizations operate under a haphazard approach in which they either inherit formal plans from predecessors or funders, or follow incomplete plans without time or expertise to develop disaster response plans into a formal organization-wide protocol. Food organizations involved in providing food access, supply, and distribution should adopt a formal emergency planning procedure that includes the requirement for backup generators, identification of alternate food transportation routes, and guidance for reconstruction of food supply and distribution centers in lower-risk areas.

Given limited food bank capacity and inadequate federal food assistance services in the aftermath of disasters, cities must build a strong communication network across government agencies, NGOs, nonprofits, and food businesses to ensure that local organizations have the capacity to meet physical and economic food access challenges for vulnerable, food-insecure populations. This should include effective communication of (and resource distribution for) personal and household food disruption preparedness.