St. Louis City and County are situated in the triangle formed by three rivers: the Missouri, the Mississippi, and the Meramec, with numerous tributaries crisscrossing the landscape. Unsurprisingly, the area is no stranger to floods.  Approaches to managing flood risk vary, and include traditional built infrastructure, such as levees and flood walls.  Following the Great Flood of 1993, St. Louis has also invested in protecting floodplain lands.  These efforts have been facilitated by a strong institutional approach to funding conservation.

In 2000, voters of St. Louis City and County, as well as neighboring St. Charles County, approved a small sales tax to fund a new public agency, the Great Rivers Greenway (GRG) District.  GRG is tasked with overseeing the planning and execution of a network of trails and open spaces designed to link rivers, parks, and communities throughout the St. Louis region. Although not established with climate adaptation as an objective, this approach to conservation, often targeted at riparian corridors, has created natural infrastructure that lowers flood damages.  St. Louis’ GRG offers a model that could be adopted in other regions as a way to fund green infrastructure for building climate resiliency. 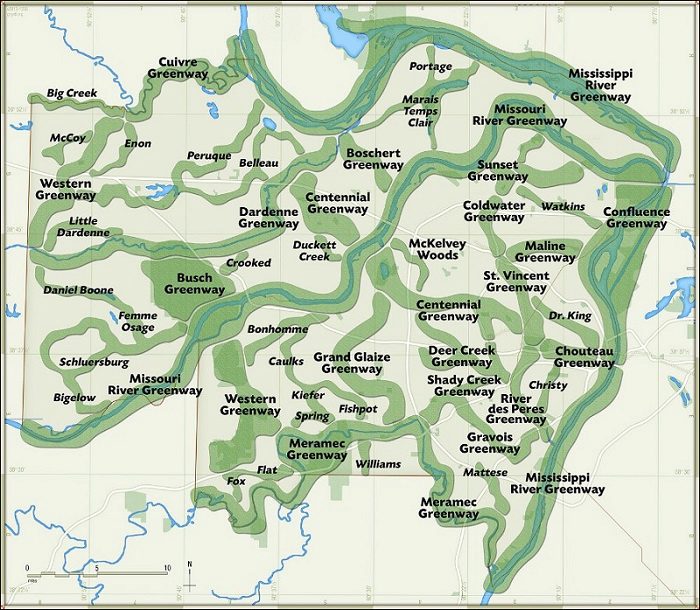 Greenways are outdoor spaces connecting people and places through a network of trails, conservation projects, and park amenities.  Greenways are found in both urban and rural settings and are frequently created by transforming strips of underdeveloped land into recreation and conservation spaces.  Greenways can offer a wide range of benefits, such as wildlife habitat, stormwater management, flood damage reduction, recreational opportunities, combating heat island effects, improving water quality, and others.

While greenways can be found throughout the US (for example, see here), what distinguishes St. Louis’ greenways is that they are part of an expansive regional plan designed to capitalize on the region’s natural features in order to interconnect green spaces, with particular emphasis on floodplain conservation (other cities with larger scale greenway plans include Indianapolis, Houston, and Columbus, for example).  In 2003, GRG developed the River Ring Plan to establish a long-term vision for conservation in the St. Louis region.  Working with a variety of local stakeholders, the Plan identified a system of greenways comprising over 600 miles of trails throughout the three counties.  Since its creation, GRG has completed 117 miles of greenways, with another 200 miles currently in planning.  The River Ring concept seeks to eventually encircle the counties with greenways that follow the natural path of rivers and streams.  It targets the confluences as key recreational spaces.

GRG serves approximately 2 million people throughout a 1,200 square mile district.  GRG’s Board of Directors is made up of representatives of the three participating counties who govern the distribution of funds.  One key feature of the public agency is that GRG does not have oversight over existing trails, parks, and recreation areas, but rather coordinates with municipalities during the planning phase for new greenways to make sure that these investments link well with existing or planned parks.  By providing comprehensive plans and funding, GRG helps streamline projects that cross multiple municipal jurisdictions.

GRG’s operations are supported by half of 1/10 of a one‐cent sales tax created in 2000 to invest in and connect the St. Louis region with greenways. In 2013, voters easily passed another proposition with a 3/16 of a one‐cent sales tax to help fund conservation around the Gateway Arch as well as enable GRG’s work to continue into the future.  Sixty percent of funds from this second sales tax are dedicated to restoring, maintaining, and improving trails and parks in the GRG District.  Currently, the two sales taxes provide annual revenues of approximately $20 million for GRG’s operations.

Trust, coordination, and strong public stewardship seem to play a major role in St. Louis’ ability to levy taxes to fund conservation and the creation of the River Ring.  The St. Louis region has a history of voter approval for taxes that are used for recreational amenities.   For example, the St. Louis Zoo and Museum District has been partially funded by property taxes since 1972, with the district distributing net tax revenues that total more than $70 million annually.  Voters trust the institutions that manage these funds, as witnessed by the passage of the additional sales tax in 2013 to expand GRG efforts.

While GRG predominantly focuses on recreation and environmental benefits for the region, the greenways also help lower flood damages by increasing water storage along rivers and keeping development out of high risk flood areas.  GRG’s emphasis on floodplain conservation builds on a history of protecting floodplains: two decades ago, after the Great Flood of 1993, the state of Missouri and local governments invested in floodplain land acquisition using Federal Emergency Management Agency (FEMA) grant funds and Community Development Block Grants.  The state acquired over 4,000 frequently flooded properties. Within the St. Louis region, many of these properties were eventually incorporated into municipally managed parks and provided the basis for greenways near the Meramec and Missouri Rivers.

Since the creation of GRG in 2000, GRG has continued to plan greenways on these acquired lands in the floodplain, as well as target new areas for conservation.  Annually, GRG allocates over $1 million for land acquisitions.  As part of its long-term plan, GRG prioritizes certain areas and properties for acquisition and uses funds to acquire priority properties when they become available.  After a greenway route has been identified, GRG works with the local municipalities to acquire use of the land from the public and private entities that control it.  GRG usually has to purchase or acquire use of land from multiple landowners.  Many of its acquisitions come from homeowners located in the floodplain that are directed by their municipal officials to GRG when they are interested in selling.

Ultimately, one of the major benefits of a standing program is that GRG can respond quickly to target acquisition properties when opportunities present themselves. By keeping local funds readily available, GRG does not have to rely on federal floodplain land acquisition funds, which include many requirements for inclusion, restrictions on redevelopment, and can take years to secure.

GRG’s investments in the River Ring are producing climate adaptation benefits for the region.  The flood risk reduction benefits will increase in value, as scientists predict increases in flood risk as the planet warms.  Countless studies have demonstrated (for example, see here) that protecting, maintaining, and restoring wetlands and floodplains helps mitigate flood impacts.  By design, St. Louis’ greenways provide a buffer between the regions’ waterways and residential and commercial areas during periods of heavy rain where there is high flood risk.

Greenways could help cities adapt to other climate changes, as well.  Creating green space is one of the best ways to mitigate urban heat islands, for example.  St. Louis, in fact, is one of the top ten cities with the fastest growing urban heat islands.  These heat islands are a major threat to public health and safety, as heat is the number one weather-related killer in US.  Notably, St. Louis is one of only two cities in the US that has both mandatory and voluntary strategic policies and programs related to increasing the urban canopy.  These could usefully integrate with GRG’s goals.

A lesson for elsewhere?

GRG offers a model that could be applicable in other regions of the US seeking to use natural infrastructure as part of their climate adaptation strategies.  By having a strong cross-jurisdictional public agency like GRG, with a dedicated funding source, the St. Louis region can more easily use green infrastructure investment as a tool to build resilience to climate changes, while providing additional benefits from conservation and recreation.  This model may be best suited for other legacy cities—older industrial cities that have experienced sustained job and population loss over the past few decades—where efforts are underway to help rebuild the central core, repurpose vacant land, and build stronger local governance and partnerships (see here and here).  Using natural lands to improve climate resilience as part of those efforts could further enhance the livability of these cities.