Quantifying 50 Years of Misogyny in Music

Dr. Boghrati has been a post-doctoral researcher at the Wharton Risk Center for the past two years. Her research focuses on extracting psychological phenomena from text. To do this she uses advance machine learning and natural language processing techniques to study behavioral constructs. In a recent project, word embedding techniques  were used to measure cultural changes over time, namely misogyny in music. In this blog post, she discusses this research.

Misogyny is defined as a “dislike of, contempt for, or ingrained prejudice against women” and it’s evident in a range of domains and disciplines in which women are seen and treated as inferiors. For example, research has shown that when students are assigned to teachers with gender stereotype, it influences students’ performance; girls underperform in math, for example (Carlana, 2019).

Bias in general, and gender bias in particular, is continually reinforced through culture. Cultural items, such as songs, books, movies, etc. are contributing to this effect and influence their consumers’ behavior. At the same time, they also represent the setting and environment they are produced in. For example, research shows that sexual-aggressive songs, increase misogynous thoughts and behavior (Fischer and Greitemeyer 2006). On the other hand, pro-equal lyrics, increase positive behavior toward women (Greitemeyer, Hollingdale, and Traut-Mattausch 2015). Therefore, language is one of the keys in delivering and manipulating gender bias.

Given the clear impact of language and song lyrics on misogynous behavior and thoughts, we seek to analyze and quantify such biases in music over time.

We collected more than a quarter of a million songs from six music genres—rock, pop, country, rap, dance, and R&B—from 1965 to 2018.

To measure misogyny in lyrics, one method would have been to read through song lyrics over time and manually rate them based on how misogynist they are. However, this approach would have been subjective, time-intensive and infeasible given the dataset of upwards of 250,000 songs. Instead, we used recent approaches in text analysis and machine learning, specifically, word2vec (Mikolov, Sutskever, Chen, Corrado, and Dean 2013), a very well-documented word vector representation technique in natural language processing.

Word2vec, maps words to numerical vectors. Vectors for words that are semantically similar (such as “fruit” and “pear”) are located closer to one another compared to words that have semantically dissimilar (such as “fruit” and “car”). This can be seen as analogous to an implicit association test, where people demonstrate faster response time when asked to pair similar (than dissimilar) concepts. This approach helped us to examine whether language used to describe men and women in lyrics is different, and whether it has changed over time. For example, if successful is mostly used along with references to men, then the word vector for successful is closer to “men” compared to “women.”

To look at misogyny in music, we analyzed over a quarter of a million songs for more than 50 years across six genres. We do not see much evidence for explicit forms of misogyny, for example showing aggression toward women. In general, misogyny is portrayed implicitly in lyrics.  Lyrics were more biased against women in the 1970s compare to today and such biases has decreased over time. In those earlier decades, men were more associated with desirable traits including competence and intelligence—and they still are—but the gap between the two genders has decreased. That is, women are more likely to be associated with such traits today compared to the past. Further examination shows that the decreasing difference holds for rock, pop, and country music, whereas dance and R&B do not show as much change. Rap on the other hand, shows an increasing trend in misogyny. Finally, results suggest that number of female artists has not changed over time, however, the decrease in misogyny is mainly driven by male artists changing their language; female artists were less misogynistic to begin with. 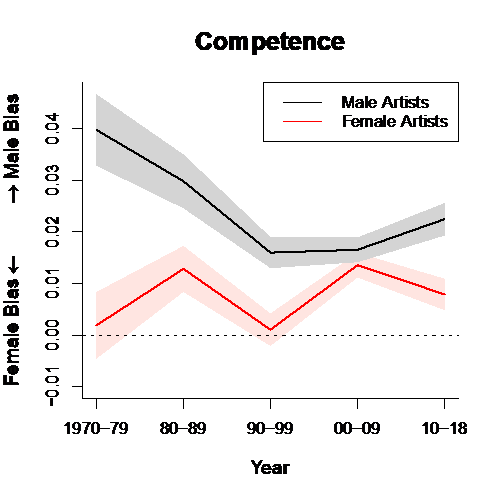 The results deepen our understanding of how incidents of misogyny in lyrics has changed over time, and among which musical genres and artists such biases might be more visible. Further, they emphasize the importance of looking at subtler measures of misogyny, rather than only considering aggression as a proxy for misogynous behavior. Finally, in general, the results showcase the application of word embedding and natural language processing techniques in analyzing culture and cultural dynamics. These emerging approaches have the potential to shed light on a range of interesting consumer behavior questions.