Climate change is likely to increase the risk of catastrophic natural disasters, particularly for island nations due to their geography. Dominica, located in the eastern part of the Caribbean, is one such country. In 2017, Hurricane Maria caused an estimated $1.3bn in damages to Dominica, equivalent to 226% of the country’s annual GDP. Following the storm, the Government of Dominica estimated a doubling of people living in poverty, and over 10,000 microbusinesses required government support. Most of those living in shelters after the storm were women and children.

In the aftermath of Maria, the Climate Resilience Execution Agency for Dominica (CREAD) was established to lead and coordinate strategic initiatives with the goal of making Dominica “the world’s first climate resilient nation.” In fall 2021, we partnered with CREAD to implement a survey to study people’s perceptions of hurricane risk and their insurance options.[1]

We first investigate people’s beliefs about the likelihood of tropical storms and hurricanes, and whether these perceptions accurately reflect climatological probabilities. We then study the damages from Hurricane Maria, and how people use existing insurance options to protect themselves against such storms. Finally, we discuss parametric insurance as a way to address shortcomings in the existing insurance market.

The adoption of insurance against natural disasters is driven in part by people’s perceptions of the likelihood of such calamities. To gauge their perceptions of the risk, we asked respondents how likely it is that the eye of a tropical storm or hurricane will pass within 100km of Dominica by the end of the year. Figure 1 shows the results.

Figure 1: Respondents’ perceived likelihood of hurricane realizations within 100km of Dominica in 2021 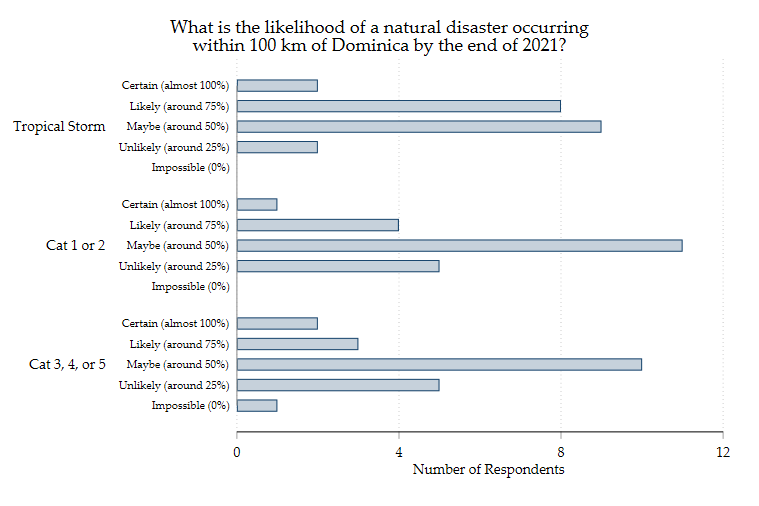 Note: The figure shows the responses of people when asked about the likelihood of a given storm (tropical storm, Cat 1 or 2 hurricane, and Cat 3, 4, or 5 hurricane) occurring within 100 kilometers of Dominica by the end of 2021.

Almost half of the respondents said that it would be likely or certain that there would be a tropical storm within 100km of Dominica between September and December 2021. Only a quarter of respondents believed that it would be unlikely that a hurricane would pass within 100km of Dominica by the end of 2021. However, the percentage of people who believe that a natural disaster is “likely” or “certain” to happen by the end of 2021 was 48% in the case of a tropical storm to 24% in the case of hurricanes.

Figure 2: Amounts and sources of funding to repair damages from Hurricane Maria 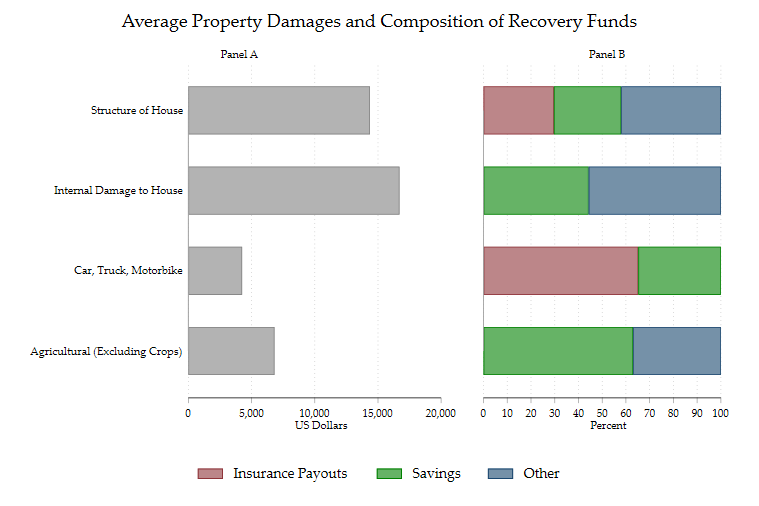 Note: Panel A shows the average damages in USD by property type incurred by respondents in the survey after Hurricane Maria. Panel B shows the sources of funding that respondents used to repair damages after the hurricane.

Respondents used insurance payouts only to repair damages to the structure of their house—roof, walls, or ceiling—or to their vehicle—car, truck, or motorbike. Respondents did not report having hurricane insurance for their agricultural property or equipment in 2017, which may point to the low availability or high costs of such products in the market.

The proportion of all damages restored across property types via insurance payouts was 38%. This suggests that even though those who had insurance were able to restore most of their damages via payouts, there is still room to improve the overall adoption of insurance in the country.

Respondents experienced significant losses to crops as a result of Hurricane Maria. The average value of lost crops was $6,980, and 75% of respondents did not receive any crop insurance payout in the hurricane’s aftermath. Even today, only 10% of people have crop insurance. Given that 25% of Dominica’s workforce depends on agriculture for their livelihood and security, policies to protect people from the damages and disruptions that natural disasters can cause to the agricultural sector could generate large benefits. Policies that extend insurance coverage to crops and agricultural equipment could help residents to avoid potential food and income shortages in the aftermath of severe hurricanes.

Hurricane Maria also caused significant damage to the electricity grid. The average respondent experienced 8 months of outages, and more than a fifth of respondents had no power for 12 months or more. Many responded to this by using a generator for extended periods of time: 95% of respondents had generators at the time of the storm, and they spent on average $8 on fuel in the two weeks following Hurricane Maria.

We asked respondents about their current insurance coverage. 76% of respondents claimed to own at least one form of property, agricultural, or life insurance. However, respondents reported currently having few options to insure their assets against storms.

In 2021, CREAD launched Flexible Hurricane Protection (FHP) with an initial rollout in Dominica. FHP is a parametric policy. It pays a pre-specified amount whenever NASA/NOAA remote sensing technologies identify a triggering storm, pre-defined by all parties as a combination of strength (ranging from a tropical storm to category 5 hurricane) and geolocation (whether the eye of the storm is within 25km, 50km, or 100km of the island perimeter). This contract enables rapid payouts, eliminates bureaucratic claims processing (which reduces fixed costs), and limits the scope for errors relative to indemnity insurance.

Our survey included 8 individuals who had bought FHP policies and 10 people who attended informational sessions about the product but chose not to purchase coverage. In the group discussions that accompanied these informational sessions, participants valued the transparency of the product and the guarantee of a fixed payout, which stands in sharp contrast to the process under indemnity insurance, whereby claims adjusters determine the payout based on damages. Focus group participants explained that these are locally known as “reducers,” reflecting that they are perceived as looking for ways to reduce the payout.

Most people who bought FHP intended to use the payouts to restore damages from future storms. One respondent explained that they would use the FHP payout for “repairs and to cover other expenses that may occur from the hurricane.” Some respondents mentioned that they would use the FHP payout to recover potential agricultural losses, which makes sense given the low current adoption rates of agricultural insurance reported by respondents.

Our survey responses suggest that people currently do not have sufficient access to insurance products to protect against increasing climate risks and that the structure of those products does not meet their needs. Parametric policies might be the way to address this gap in the market and provide rapid payouts to customers in the event of a natural disaster.

[1] 73 potential respondents were contacted, but only 21 completed the survey.

[2] The question defined this product as a policy that gives a payout in the case of a rainfall deficit over a given number of weeks, and the payout depends on the extent of the deficit.

[3] The question defined this product as a policy that receives a payout in the case that rainfall exceeds a pre-specified amount, and the payout depends on the amount of rainfall.