Flood Insurance in the US: Lessons from FEMA’s Recent Data Release (Part I)

This is part I of a two-part series.

Out of all natural disasters in the United States, floods are responsible for the most damage.  To ensure sufficient funding for repair and rebuilding post-flood, households need flood insurance.  While there is a small, emerging private market, the overwhelming majority of residential flood insurance is provided through the National Flood Insurance Program (NFIP), housed in the Federal Emergency Management Agency (FEMA).

At the beginning of last summer, FEMA released a wealth of historical data on flood insurance in the United States. The recent release of NFIP microdata has enabled a closer look at this program, providing an overview of flood risk in the United States and the challenges of flood risk management.  Scholars will be mining this data in the coming years, but we offer four initial insights from the microdata and discuss the policy implications of these findings.  The first two are presented in this post and the second two will be presented in a follow-on post.

A characteristic of disasters is that their losses over time are “spiky.”  That is, there will be quiet periods with relatively few losses punctuated periodically by a catastrophic loss year.  This pattern is clear in the NFIP claims data.  The figure below shows the total number of claims (orange bars) and the total claim value (blue line) in 2018 US dollars (USD) for each year from 1978 to 2018. 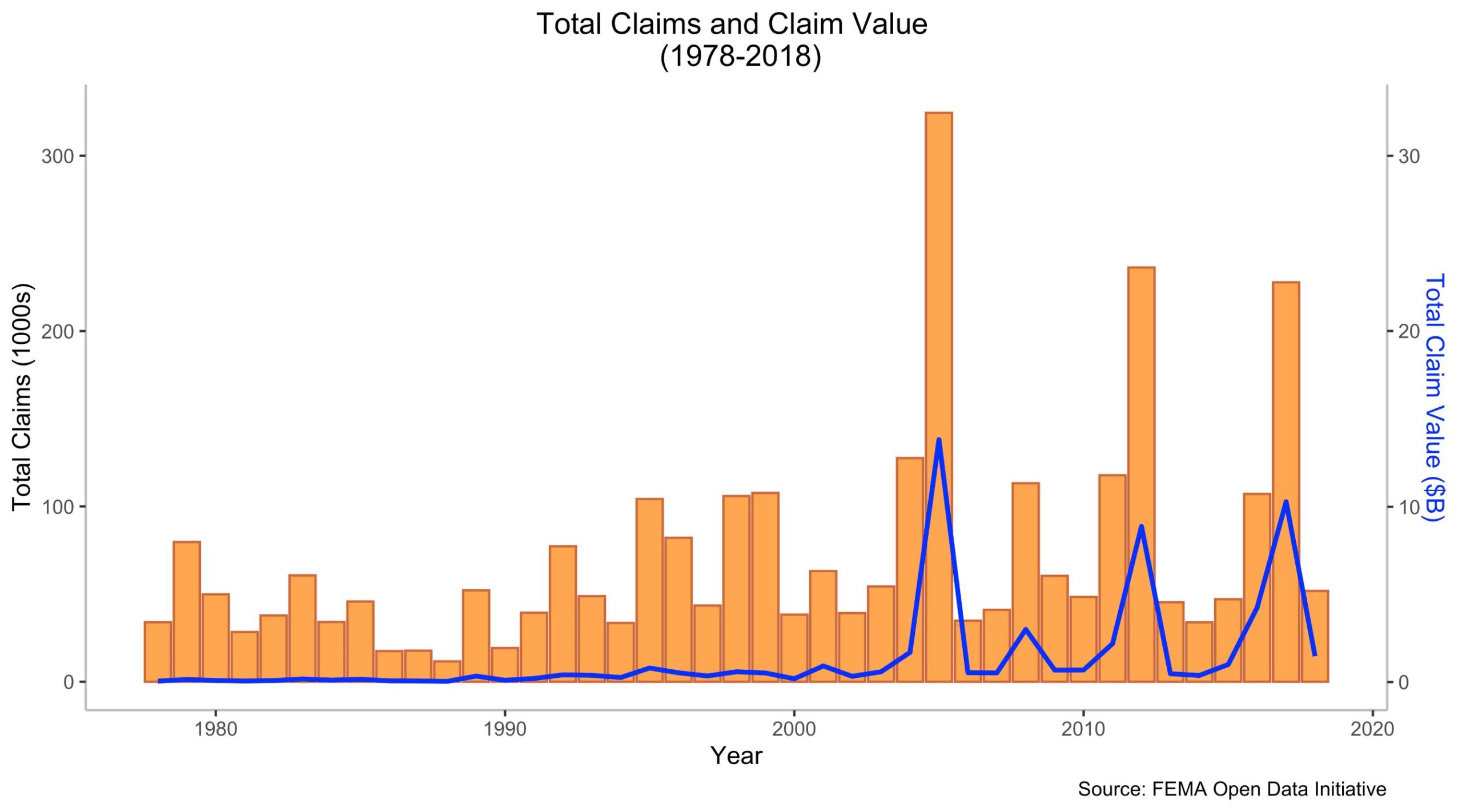 These high-loss years in the program are driven by an increase in not only the total number of claims, but also the average amount of each claim.  This is seen in the next figure which shows the percent of policies that file a claim in a given year (orange bars) and the average individual claim value (blue line).  Both 2012 and 2017 have a ratio of total claims to total policies in force more than twice the average of the other years for which data are available (2009-2018). 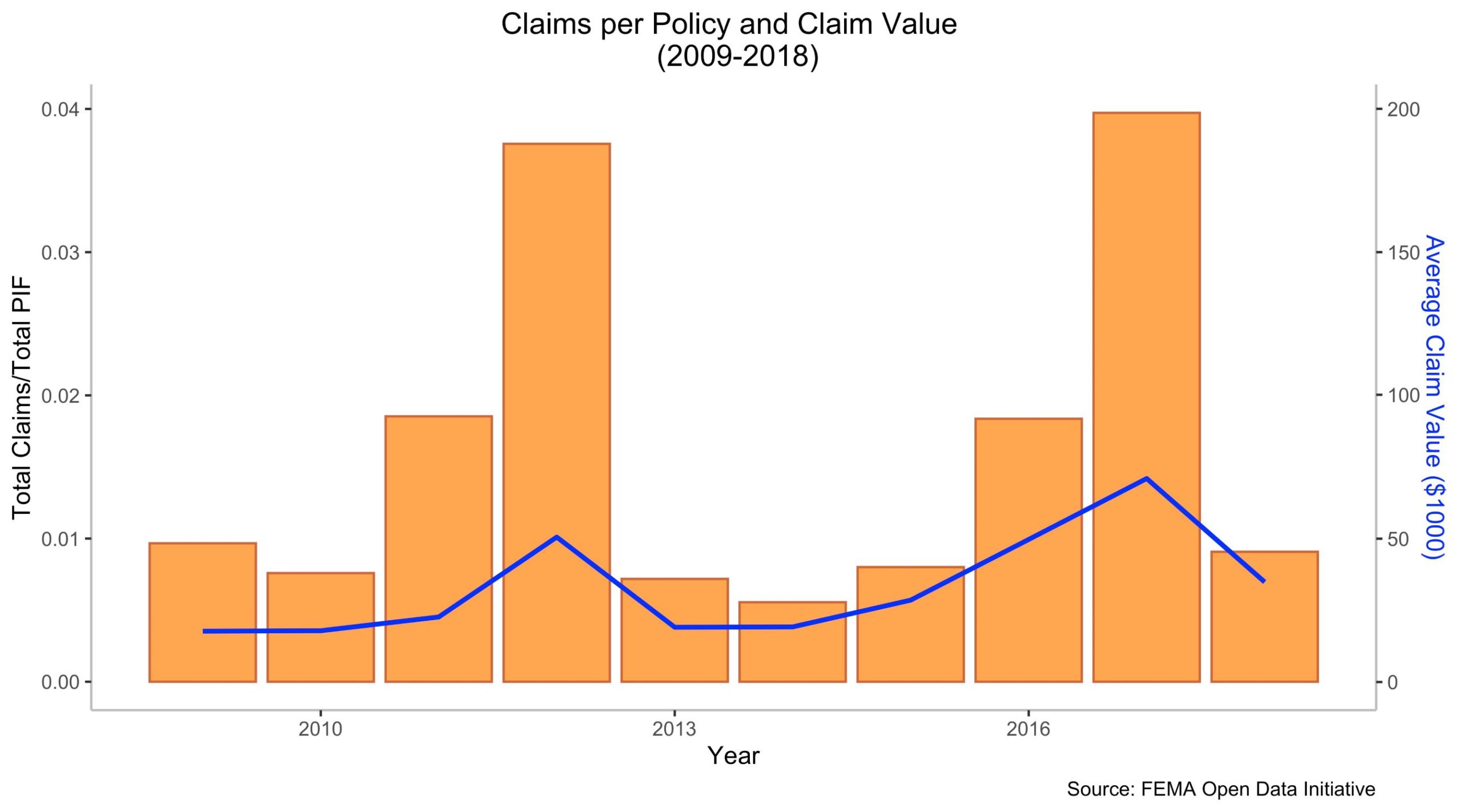 It is this catastrophe potential, or the spikiness of the losses, that make floods difficult for the private sector to insure at prices that people are willing or able to afford.  A private company would need access to enough capital to cover losses in those severe years to pay claims and prevent bankruptcy.  The costs of ensuring access to this capital—such as through setting aside surplus, purchasing reinsurance, or making use of insurance-linked securities—are passed to consumers.  This makes disaster insurance more expensive than non-disaster lines, such as automobile insurance. The NFIP has tried over time to keep flood insurance costs more affordable as a policy objective, but absent explicit Treasury support, such price suppression creates deficits.  The program is now over $20 billion in debt—an amount it cannot repay.  Policy options that target assistance at those most in need through a Treasury-funded program and allow the NFIP to shift toward a more financially-sound framework have been suggested by many stakeholders (e.g., here and here).  Local policies, such as property tax rebates in low-income areas for those who purchase flood insurance, and private sector options, such as microinsurance, could also be considered.

2. The number of claims and claim value are both increasing over time.

Despite the spiky loss profile of floods, there is still a clear upward trend in losses over time, even after adjusting for inflation. From the early days of the program until now, the total volume of annual claims has increased on average by roughly 2,100 claims per year. This upward trend is apparent, even if you exclude those three high-loss years of 2005, 2012, and 2017.  Removing those years from the trend, the total volume of annual claims still increased on average by around 900 claims per year. 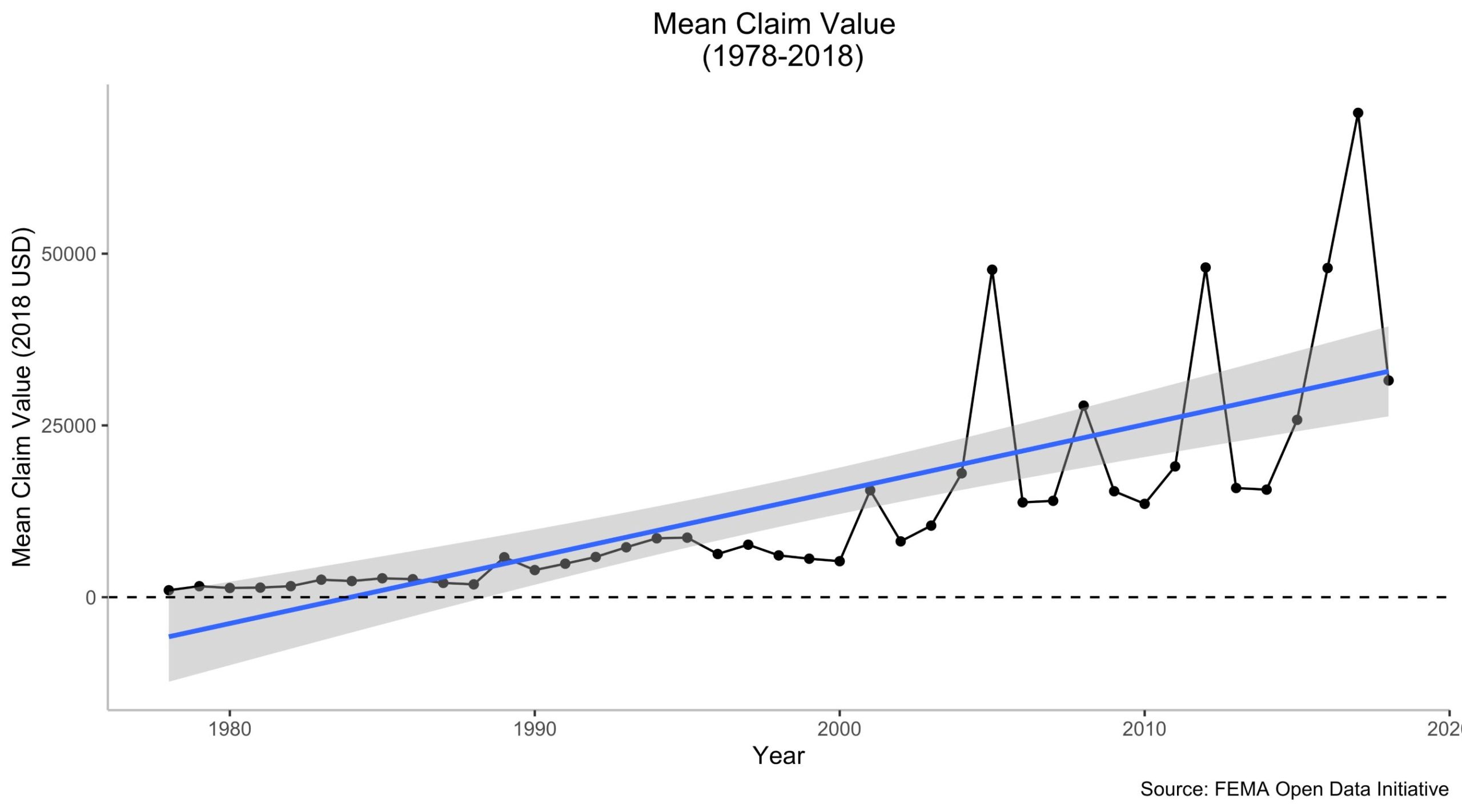 Note: We define the “value” of a claim as the sum of the amount paid on a claim in the following payment categories: building, contents, and increased cost of compliance.  In all statistics and figures included herein, claim value is standardized to 2018 US dollars (USD).

What is the result of the increase in claim volume and average claim value over time?  The value of all claims in a given year has also increased, with an average annual increase of around $109 million (2018 USD) per year from 1978 to 2018.

Flood claims are escalating due to continued inappropriate development in flood-prone locations, as well as trends associated with climate change such as intensifying hurricanes, increases in heavy rainfall events, and rising sea levels.  These trends necessitate greater investments in cost-effective hazard mitigation measures, as well as changes in land use patterns.  Such shifts are often politically difficult but are becoming increasingly necessary.