The Role of Home Equity in Flood Insurance Demand

With another active hurricane season ahead of us, the vulnerability of the U.S. coastal housing market will likely once again become a central policy topic. Studies have shown that homes without flood insurance suffer elevated rates of delinquencies and foreclosures after being hit by a storm. Much of this displacement is due to the fact that flood insurance is rarely required by lenders or purchased by homeowners outside of designated 100-year floodplains, even though many areas outside the floodplain face high flood risk. As millions of homes in the U.S. are exposed to increasing flood risks, the lack of insurance coverage can threaten the sustainability of the mortgage system as we know it.

In a recent paper, “What’s at Stake? Understanding the Role of Home Equity in Flood Insurance Demand”, we explore one potential reason why flood insurance take-up remains so low, despite the low premiums offered by the National Flood Insurance Program (NFIP), and the implications for who ultimately bears the costs of flood risk in the United States. If a highly leveraged borrower’s home is flooded, it may make more financial sense to default on their mortgage and walk away from the damaged home rather than pay for repairs. In this way, the option to default can act as a high-deductible insurance policy, thereby reducing their demand for formal flood insurance. In contrast, homeowners with more equity in their homes will have a larger financial incentive to avoid default and thus be more likely to buy flood insurance. This mechanism predicts that higher home equity leads to greater demand for flood insurance.

We test this hypothesis in the data using the housing boom and bust of the 2000s as a natural experiment. From 2000-05, housing markets across the U.S. experienced varying degrees of a housing boom, characterized as by sudden acceleration in land value appreciation that cannot be explained by fundamental economic conditions. Figure 1 shows two markets with a large housing boom (Tucson, AZ, and Naples, FL) versus two with little change (Athens, GA, and Galveston, TX). Past research has shown that these gains in land values largely reflected housing bubbles driven by speculative activities, which were eroded in the housing busts after 2007.

During this period, borrowers in markets with large booms saw sustained increases in their home equity through the boom, followed by a large decline during the crash. On the other hand, markets without large booms had relatively muted price movement. Importantly, over this entire period the expected payout of flood insurance remained unchanged because the buildings and physical risks were the same. This provides us with an opportunity to investigate how home equity motivates flood insurance demand by comparing the trajectory of flood insurance take-up in markets with booms versus those without. 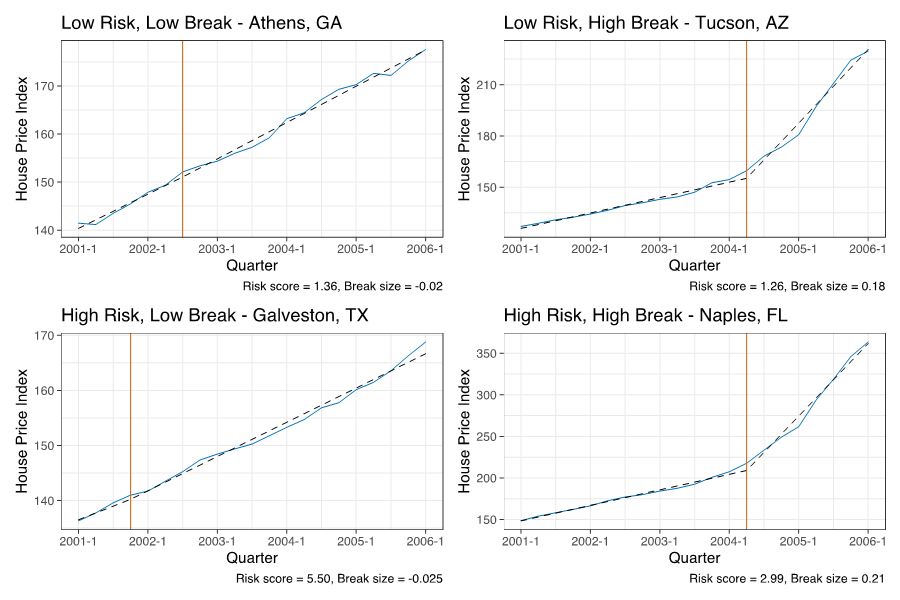 To further investigate the mechanism behind this effect, we show two additional pieces of evidence. First, we find that the drop-off in flood insurance during the bust is particularly large for homes built between 2003-05. Their owners likely bought them at the peak of the boom and thus would have had little home equity during the bust, consistent with our implicit insurance mechanism. Second, we separately estimate the effect in states with a judicial foreclosure process and in those without. Some states require all foreclosures to undergo a judicial review, which protects the borrowers’ interests in the process. As expected, the relationship between home equity and insurance demand is much stronger in these states with judicial foreclosures than in those without, further supporting our proposed mechanism. We have also conducted an extensive series of robustness checks and other mechanism tests (see the full paper here for details).

The main takeaway from these findings is that homeowners with a highly leveraged mortgage do not fully internalize their disaster risk. While other studies have considered incomplete risk disclosure, cognitive biases, and government disaster aid as contributing to low flood insurance take-up, our results suggest a new explanation for the flood insurance gap and points to several important policy issues. First, much of the cost of post-disaster defaults is ultimately borne by taxpayers because most of these loans are guaranteed by Government-Sponsored Enterprises (GSEs) such as Fannie Mae and Freddie Mac. This is an implicit cross-subsidy from all taxpayers to homeowners exposed to flood risk, which is likely to grow over time. Second, this implicit subsidy can distort the incentive to insure, adapt, and develop in risky areas given its sizable effect on insurance demand. Finally, as increasing flood risk starts to drive down coastal property values, our findings caution that this might cause a decline in flood insurance take-up, leading to more reliance on disaster aid and placing more strain on the housing finance system through delinquencies and defaults.

To address this channel of implicit risk transfer within the mortgage system, one possible policy solution should focus on reflecting risk in the mortgage system, especially for homes outside the 100-year floodplains. Indeed, recent months have seen significant steps taken by federal agencies to reckon with the reality of climate risks and impacts. In particular, the Federal Housing Finance Agency (FHFA) – the main regulator of the GSEs – has issued a Request for Input on climate and natural disaster risk, reflecting a serious consideration of regulatory action in this area. The NFIP has released Risk Rating 2.0, which aims to provide more accurate risk ratings for premium-setting in the program. The impacts of these policy measures are important topics for future research.

The full paper is available at SSRN.