The Fiscal Impacts of Wildfires on California Municipalities

Recent years have seen record-breaking wildfires across the globe.  In 2017 and 2018, California experienced devastating wildfire seasons that each caused roughly $12 billion in insured losses.  The state may see such years more frequently as the planet warms. In the western U.S., wildfires are projected to increase in both frequency and intensity due to climate change.

The figure below shows the annual number of acres burned in the U.S. over the last two decades: the trend is decidedly upward.  Building in areas at risk of wildfire is one driver of losses.  And at close to 4.5 million, California has the greatest number of homes at risk from future blazes. 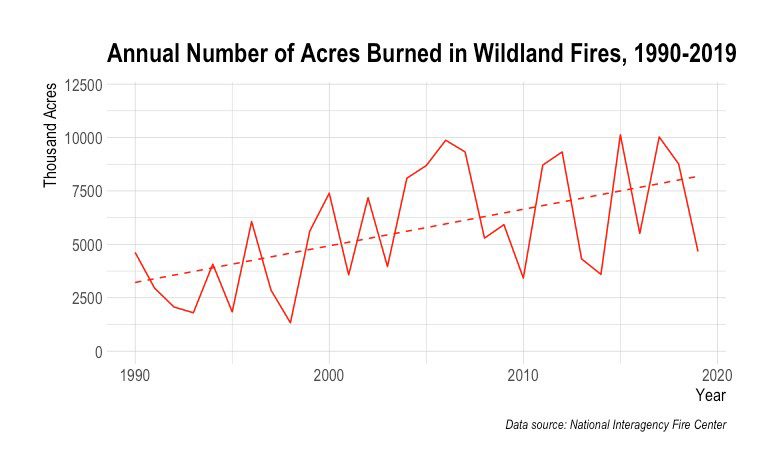 Besides immediate property damages, wildfires can bring about longer-term impacts. For many local governments, a nearby wildfire can take a heavy toll on their fiscal health. The fire might threaten part of the property tax base. It might lead some residents to move away or reduce tourism, both with impacts on municipal revenues. And yet, the recovery itself would demand higher, not lower, public spending. A municipality without sufficient reserves might have to resort to higher taxes or greater borrowing. In turn, this could compromise its long-term ability to provide other community services and create significant welfare implications for its residents.

While concern about these impacts was voiced in local media following California’s destructive wildfire years, we found very little empirical research on the question of how wildfires and other natural disasters impact municipal revenues and expenditures.  In a working paper, we estimate the effects of wildfires on local public finance in California, looking, in particular at various sub-components of municipal budgets. The findings depict a nuanced reality where physical impacts are mediated by policies and market adjustments.

Wildfires often burn undeveloped areas. Using GIS data on fire perimeters, we construct a measure of population exposure for each municipality. We focus on fires that affected at least 10% of a municipality’s population during 1995-2010. It is important to note that the wildfires California experienced in these years were much more modest than in 2017 and 2018.  We match these wildfire occurrences to annual financial reports from the State Controller’s Office. To isolate the impact of the fires from changing economic conditions, we compare municipalities that experience wildfires to similarly at-risk municipalities that do not experience a wildfire. We have three main findings.

1. Revenues increase in the five years following the fire.

We estimate that total general revenues increase by 10.5%. Property tax revenues increase by 21.2%. This perhaps surprising result appears to be driven by California’s Proposition 13 which artificially suppresses property assessments until time of sale. Wildfires lead to a turnover in housing, which allows for a resetting of assessments. Consistent with this explanation, we find a 57% increase in the real property transfer tax, which is a direct measure of transacted property values. Sales tax revenues also experience a temporary increase. This can be explained by rebuilding activities and replacement of damaged items. Widespread insurance coverage for fire likely facilitates this type of spending. We also find an average increase in functional revenues of 12.6% starting from the second year post-fire. This is largely driven by special taxes, which require voter approval (and explain the time delay). Service charges and intergovernmental transfers are largely unchanged.

Total expenditures increase by 17.3%. This mainly reflects greater spending in three categories: public safety (up 18.5%), community development (up 40%), and transportation (up 17.8%). Interestingly, we see a persistently higher level of spending on public safety and community development rather than a one-time response. This suggests much of the increase might be attributed to long-term defensive investments. Decomposing the spending, we find that expenditures on fire and disaster preparedness both increase dramatically, which further supports this interpretation. This increased spending suggests that there is a heightened risk perception by local policymakers or a belief that prior levels of spending on these activities were insufficient.

The net effect of wildfires is a decline in excess revenues (total revenues minus total expenditures) of $97 per capita. The magnitude of this decline is substantial: it amounts to 10.7% of total revenues per capita. It also corresponds to a 24.7 percentage point increase in the probability of a budget deficit. We show this in the figure below. 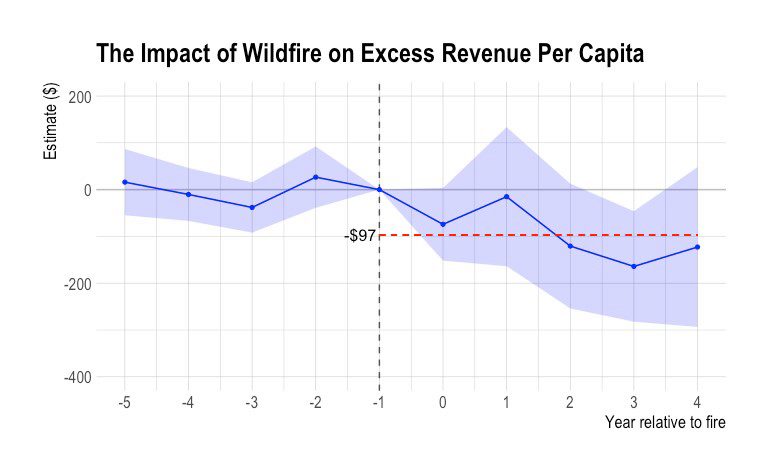 So, what are the takeaways of our results? The wildfires in our sample are modest compared to the devastating blazes that California experienced in 2017 and 2018. Still, they are indicative of the majority of wildfires and provide a lower bound on impacts from more severe fires. Our results suggest that even modest wildfires can be fiscally harmful to local governments. This may be even more pronounced outside of California, since one of the main sources of increased post-wildfire revenues in California is due to unique legislation in the state concerning property taxes.

Our findings also shed light on the incentives of local governments to invest in fire mitigation. On the one hand, we find that wildfires have a negative and substantial net impact on municipal budgets. It would thus be in a municipal government’s interest to mitigate such risks. On the other hand, however, municipal governments increase investments in fire defense and disaster preparedness following the fire, which suggests they believe they had under-invested in such measures prior to the fire. Such disaster-driven policy responses may be inefficient. The increase in spending on community development might also reflect an effort to enhance fire preparedness. However, it could also be driven by a strong demand for community services and housing that propels rebuilding and continued expansion of the wildland-urban interface (WUI), which could imply more properties in harm’s way.

As wildfire risk escalates in California due to climate changes, our findings highlight an often-overlooked cost of natural disasters: impacts on municipal finance. Changes in municipal expenditures and revenues can trigger changes in tax assessments and also have impacts on service delivery, both with welfare impacts for residents. Further investigation of how changes in municipal budgets impact households and businesses in the community would be useful follow-on research.

The full working paper is available at SSRN.