Hiyori Yoshida is a recent graduate of the Jerome Fisher M&T dual degree program with a MSE and BSE in computer science, BSE in business analytics, and a minor in math. She participated in the Risk Center’s Undergraduate Fellowship for the 2020-21 academic year.

95% of the CO2 concentration that is predicted to lead to the worst effects of climate change is already in the atmosphere. This is why the Intergovernmental Panel on Climate Change (IPCC) states that limiting human-caused global warming to 1.5°C will require the use of negative emissions technologies to remove excess CO2 from the atmosphere. Negative emissions technologies include many natural and man-made solutions such as afforestation and reforestation, bioenergy combined with carbon capture and storage (BECCS), and enhanced weathering. While models developed by researchers that include negative emissions technologies rely most heavily on bioenergy combined with carbon capture and storage (BECCS), the scalability of this technology is a concern.

Enter direct air capture, or DAC. DAC uses machines to suck CO2 out of the atmosphere. If the captured CO2 is buried underground, the process is referred to as direct air capture carbon and storage (DACCS). Out of all the carbon dioxide removal technologies, DAC has the smallest land and water usage, requiring 30 to 100 times less land than other methods like BECCS. Further, DAC plants are location-independent, meaning they can be located closer to storage or utilization sites, do not compete for land needed to grow food, and do not need long-distance CO2 transportation.

While DAC technology faces several challenges including resource limitations and risks such as over-reliance, carbon storage costs and safety, and unsustainable uses of captured carbon, research from the IPCC has shown that it will be required to reach emissions targets. To make the massive and rapid deployment of DAC possible, the federal government must increase funding dedicated to research and development, the procurement of CO2 offsets, as well as implement or improve policies to incentivize carbon capture and storage. This article explores DAC technology, benefits, and risks, and provides recommendations for how to achieve the required amount and speed of deployment.

As of June 2021, there are two prominent types of DAC technologies. The first, primarily produced by Carbon Engineering, uses filters to extract CO2 from the air through a series of chemical reactions. At large scale, Carbon Engineering’s machines can capture CO2 from air for approximately $100 per ton of CO2. The firm plans to start construction in 2021 and go operational in 2024. 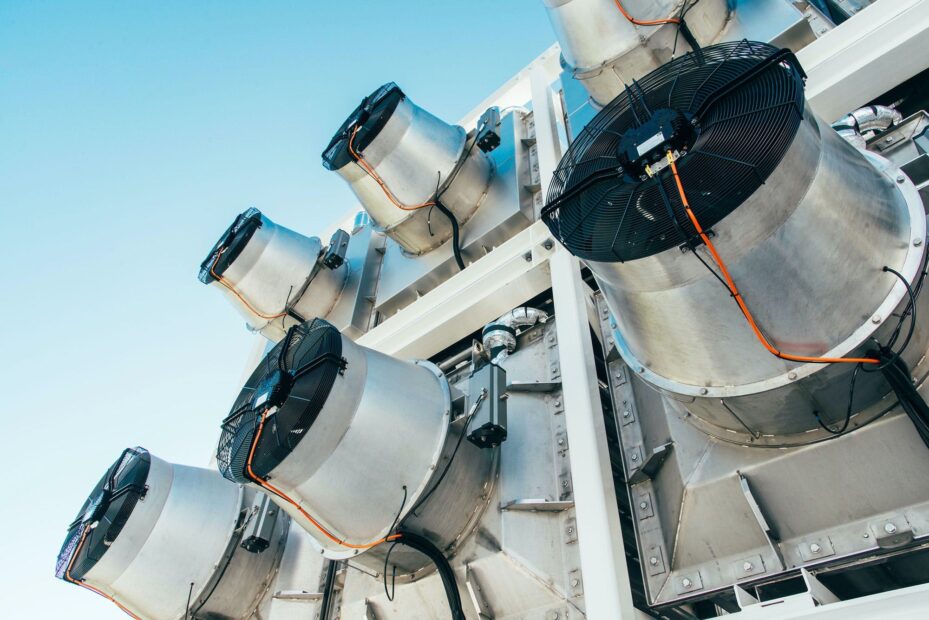 The second type of DAC technology uses amine absorbents in small, modular reactors, and is developed by the Swiss firm Climeworks. While this type of DAC currently has higher costs of about $600 to $800 per ton of CO2 removed, the potential for savings is thought to be greater because the modular design could be made on an industrial production line and waste heat could be used instead of additional energy. Currently, Climeworks’s largest plant, located in Switzerland, removes 900 tons of CO2 a year, the carbon sequestration equivalent of around 36,000 trees.

Why DAC May be Necessary

A recently published report by Rhodium Group found that even with unprecedented electrification, improvements in energy efficiency, completely decarbonized power generation, and carbon removal from enhanced natural sequestration, between 560 and 1850 million metric tons of CO2 will need to be removed by DAC technology and permanently stored underground annually for the U.S. to reach net-zero emissions by 2045. If carbon removal from other options (such as natural sequestration through trees or BECCS) fail to reach their maximum potential, up to 740 million tons per year of DAC with sequestration may be required by 2050, even under the less ambitious target of 83% below 2005 emissions levels in 2050. Thus, an amount of CO2 equivalent to 8 to 28% of 2017 U.S. CO2 emissions needs to be removed by DAC alone through 2045 or 2050, every single year.

Furthermore, Realmonte et al. find that a “massive” deployment of DAC technology could substantially lower the cost of limiting warming to 1.5 or 2°C above pre-industrial levels. Despite uncertainty around the cost of DAC, this technology could allow for global emissions in 2030 to remain at higher levels, with much larger use of negative emissions later in the century, thereby reducing climate policy costs in the short- to medium-term, as shown in the graph below. 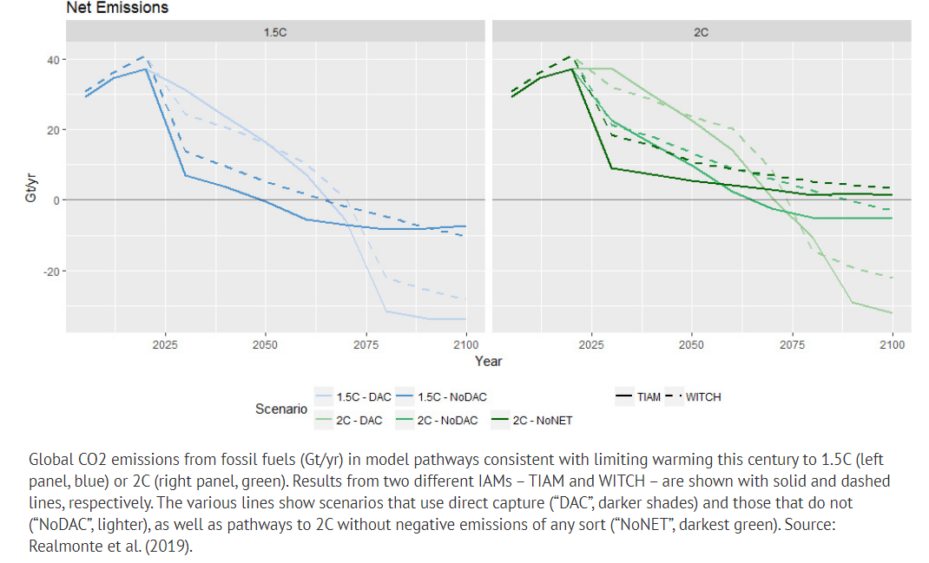 DAC will not only play a vital role in mitigating climate change but may also reduce the costs of emissions reduction. However, there are several challenges to deploying DAC at the scale deemed necessary by climate models, including resource limitations and risks.

It is uncertain whether DAC could be rolled out at the speed and scale envisioned by the Rhodium Group, which would entail expansion up to 30% each year and deployment reaching 30 gigatons of CO2 removed per year towards the end of the century. According to Realmonte et al., the energy needed to run DAC machines in 2100 will be up to 300 exajoules per year. Despite rising energy demand, this would still be a quarter of expected demand in 2100. One possible way to generate the enormous amount of energy required may be through fusion power, which could produce as much energy as burning a barrel of oil from a single glass of sea water with no waste. But because of the costs of the required elements and chemical reactions, it is still unknown whether it will ever be possible to make a viable fusion reactor on earth. Until scientists discover a way to provide 300 exajoules each year just for DAC by 2100, DAC may always be limited by this massive energy requirement.

Further, with current technology, the required deployment would require building approximately 30,000 factories, with significant resource implications, including the carbon footprint of mining, refining, and manufacturing the required metals and concrete.

In addition to resource limitations, there are several risks associated with DAC.

First, assuming that DAC can be deployed at scale and neglecting emissions reduction could lead to global temperatures rising substantially above desired levels if DAC fails to scale fast enough.

Second, storing the captured carbon is an essential part of the models that show that DACCS will be necessary for climate change mitigation. However, transporting and injecting CO2 into geological reservoirs for storage can raise concerns about pipelines, CO2 leakage, seismic activity, and water pollution. While companies like Carbfix have developed technologies to reduce the risks of CO2 storage, regulations and continued R&D will be necessary to ensure safe CO2 storage.

Third, without public policy that values carbon storage at the economically efficient level, instead of burying CO2, which by itself has no financial benefits, DAC companies can either actually remove CO2 from the atmosphere by selling the CO2 to be used for long-lasting products like concrete or undermine the benefits of DACCS by selling CO2 for purposes such as pumping it into declining oil wells to increase output, which can prolong the fossil fuel industry. Currently, there is no carbon price anywhere in the world large enough to make sequestration financially viable.

Since various independent research has predicted that DAC/DACCS will be essential in combatting climate change, the world must mitigate the risks, reduce the costs, and enable the rapid development of DAC plants. These steps include increased funding and further policy action.

2020 federal spending on DAC research was about $13.5 million. Drawing upon a recent National Academies of Sciences, Engineering, and Medicine report, Rhodium Group recommends an average of $240 million annually in new federal research, design, and development funding for DAC over the next decade. Congress should increase funding to these levels as it has strong precedent and is much less than the funding for every other energy technology program currently funded by the Department of Energy. 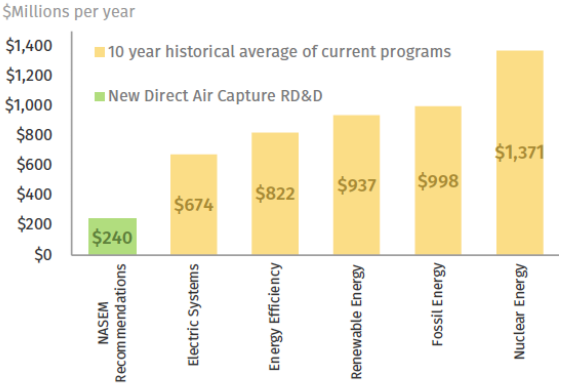 In the short-term, large-scale demonstration of DAC technologies will require government support beyond funding to increase demand for DAC, such as tax credits (including investment tax credits and possibly a carbon storage tax credit) and incentives for public procurement of CO2 offsets. Longer-term support will also need to be provided through effective CO2 pricing mechanisms and financial policies that value the negative emissions associated with storing CO2 captured from the atmosphere. For both types of policies to be enforced, further policies and standards must be established to maintain the validity of the DAC/DACCS system.

DAC, like most clean energy technologies, is not a silver bullet. By itself, it is not enough to fight climate change, is yet to be cost effective, and may never reach its full potential due to its energy requirements. But together with emissions reductions and comprehensive government support, DAC is a promising development that may well be what helps avoid the worst effects of climate change.