Arctic Shipping Activity Heating Up Despite Uncertainty and Challenges

Melting sea ice is opening up the potential for increased maritime traffic in the Arctic—presenting challenges for insurers and highlighting tensions between state interests and environmental concerns.

Arctic sea ice is shrinking rapidly. The annual minimum size of Arctic sea ice has been declining by 12.58% per decade relative to the 1981-2010 average.  This reduction, coupled with the lengthening of time where routes are ice-free, presents an opportunity for increased maritime traffic in the region. Indeed, the total number of ships entering the Arctic has increased by 25% since 2013 and the total distance sailed by all vessels in the region has grown by 75%. 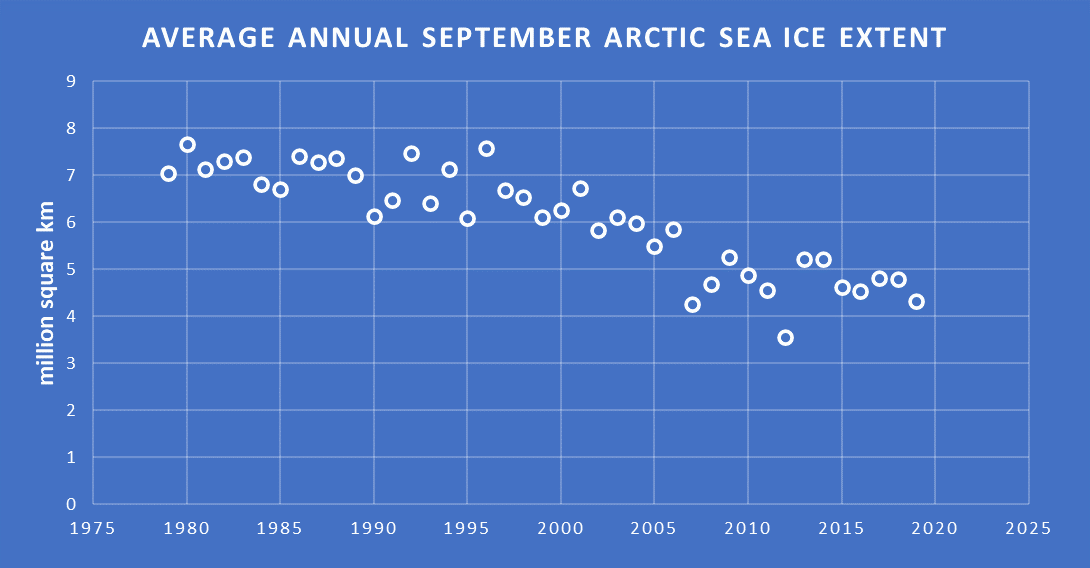 For container shippers, the navigation distance from a Northwest European port to East Asia could be reduced by approximately 40% using the Northern Sea Route (NSR) instead of the Suez Canal. However, travel speeds, icebreaker fees, hazards, capital upgrades, higher insurance premiums, and less-predictable timing can lessen the appeal of the distance saved.  And yet, even though the cost-benefit analysis may not pencil for many of the new routes or for certain types of shippers, various companies and states have made recent moves to explore the region’s potential.

In 2017, a Russian tanker became the first ship to navigate the NSR without assistance from an icebreaker vessel. In early 2018, China announced plans to develop new infrastructure and pilot voyages in order to advance a “Polar Silk Road” via new Arctic shipping routes. In July of 2018, Russian natural gas producer Novatek completed the first liquified natural gas (LNG) cargo voyage to China using the Northern Sea Route.  A month later, Danish shipping giant Maersk became the first company to send a container ship via the NSR.

This increased shipping activity raises concerns about environmental impacts in the arctic.  The ships will increase emissions in the region, leading to worse air pollution and exacerbating melting through the release of black carbon. Even the International Maritime Organization (IMO)’s MARPOL mandate to replace heavy fuel oil with very low sulfur fuel oil for Arctic vessels does not fully assuage black carbon concerns.  Ships also increase the possibility of accidents that would release oil and other contaminants, harming wildlife, and the arctic ecosystem. The Polar Code does provide some initial regulations to safeguard the arctic, but many stakeholders believe it to be insufficient.

Arctic sea routes also pose challenges to hull and machinery (H&M) and protection and indemnity (P&I) insurers—even those well-versed in regular maritime insurance. H&M insurance, which covers damage to the vessel and its equipment as well as salvage costs for the vessel and crew, is difficult to price in Arctic waters absent robust knowledge of the underlying hazards. Not only do many areas in Artic waters lack updated navigational charts but the variable nature of Arctic sea ice adds additional complexities for hazard forecasting. Available technology often does not provide crews sufficiently detailed ice hazard information for real-time navigation, hindering their ability to avoid perils in live time.

(P&I) insurers, who cover things like third-party risks for damage to cargo in transit and environmental damage from wrecks, face similar uncertainties and are particularly concerned with the lack of response and rescue infrastructure in the Arctic. Arctic shipping routes put ships at long distances from ports or rescue infrastructure, raising the potential costs for environmental cleanup (covered by P&I insurance) and salvage (covered by H&M insurance) should a ship run into problems.

The lack of data on prior claims, relatively low number of completed trips across certain routes, and a low number of incidents upon which to model losses (see Table 1) also make it difficult to set premiums. The Polar Code, while helping to standardize the machinery and hull requirements for operation under different ice scenarios and thus advancing the insurability of Arctic shipping, does little to address the lack of data on hazards, probabilities, and costs causing underwriters to proceed with caution in Arctic waters.  These challenges and uncertainties mean that insurance is harder to come by for Arctic voyages, and can come at double the cost of non-Arctic voyages of similar lengths.

As insurers and companies grow their understanding of the hazards and possibilities associated with transit through Arctic waters, Russia is taking a big step to promote these new routes and secure its position as a major player in Arctic maritime activity. According to a recent Bloomberg article, Russia is working on a plan for a state-run container ship operator (like China’s COSCO, but Russian) that “would cover the cost of any risks associated with transporting international cargoes via the Arctic’s icy waters, including possible delivery disruptions and higher insurance payments.” While the details on this plan are unclear, the proposal suggests that certain costs associated with shipping via Arctic routes will not be passed on to companies as necessary to incentivize use of the new routes. If successful, however, such a move is likely to elevate existing concerns over the environmental implications of increased shipping traffic through the Arctic. Russia’s massive diesel spill this summer, coupled with its functionally-exempt status under the IMO’s draft ban on the transport of heavy fuel oil by arctic vessels, does not inspire widespread faith in its ability to balance environmental concerns with increased Arctic shipping activity.

The Northern Sea Route’s centuries-long potential is becoming more of a reality as Arctic ice recedes—and while it’s not yet ready to displace traditional shipping routes, opportunities and risks abound in Arctic waters for state actors seeking geopolitical advantage, environmentalists, insurers and shippers alike. Importantly, the 2009 Arctic Council Marine Shipping Assessment’s  claim that “Arctic shipping will not be sustainable without the availability of marine insurance at reasonable commercial rates” remains true today. Absent a robust Arctic maritime regulatory framework, the insurance sector has an opportunity to partner with public sector efforts on projects like Canada’s Low Impact Shipping Corridors Initiative to harness the economic advantages of the arctic while safeguarding the environment.  Insurers should be working with governments (including Russia) to establish strict environmental protocols for Arctic shipping and for safety of ships, cargos, and crews.  When adopted and adhered to, these standards could help improve the availability and affordability of property and liability coverage for arctic shipping and establish sound principles of environmental governance for the region.